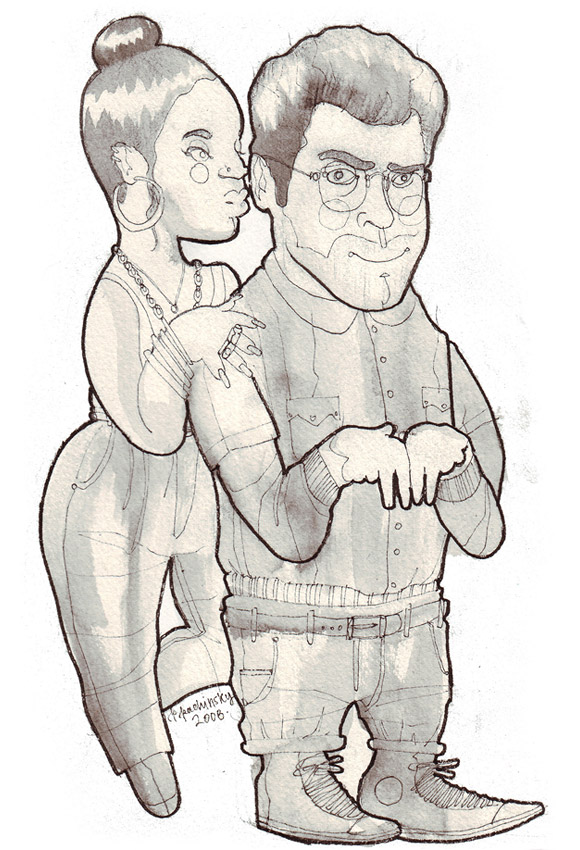 Illustration by Pearl Rachinsky
Producer, rapper, graphic designer extraordinaire Mantrakid is a recent transplant to Vancouver Island after spending over 20 years in the prairies. Through his beginnings rocking beats in Mario Paint or his grandparent’s Casio keyboard, Mantrakid graduated to Fast Tracker, discovering that he could augment previously sequenced instrumentals created by other people. But don’t let this dissuade because he’s since built a decidedly more professional studio releasing his “official” debut Palmflowerblack (despite releasing a number of albums over the years). Mantrakid is responsible for the release of some really dope Canadian albums including Cinstrumentals and Ricca Razor Sharp’s 12 Steps to a Deffer You through his label Neferiu – but don’t send him your demo…

Some people clown the Calgary rap scene (and your hockey team), what do you say to the haters?

I’m obviously biased because I grew up in that scene, but the thing I like most about Calgary is the amount of people who are being themselves. I mean, there are a ton of talented dudes, but I think even more than that, these dudes aren’t trying to be something that already exists, they’re actually pushing hip hop’s boundaries and expressing themselves in ways other dudes aren’t

So is your rap scene like your hockey team?

From what I’ve seen with the Flames, they have deadly potential, but they slack off more often than not…so maybe…

So why is the new album your debut?

Well that’s kind of funny, because there are actually like 4 or 5 “albums” out there already that came before Palmflowerblack , but those albums really never felt like true “albums.” I’m kind of a perfectionist when it comes to my own shit, and I never fully felt confident that I could actually get behind what I was doing with those other albums. They were from the heart for sure, but my technical abilities, production techniques, mic presence, etc. It all seemed a bit immature to me… Either I just had no balls, or I was being real with myself. I prefer to think I was being real with myself. I knew I could do much better. The thing is I never wanted to go the distance with those albums because I didn’t want them to be people’s first impression of my shit.

Why’d you wait so long?

I was honing my skills, practicing my performance abilities, learning my breath control, all the while making more complex or interesting beats, learning how to mix them properly, etc. It was a long time for sure, but I feel like when someone hears it, they can’t deny its potency. I couldn’t say the same for any of the other CDR’s/Tapes I put out in the past.

So, you’re pretty in touch with new technologies and such, why choose to release Palmflowerblack on CD and not a hologram or microchip implanted in the brain?

Fuck, I would have given anything to implant the chips in people’s brains. The only problem is I think people still would have treated it as a CDR mixtape if that were the case. I think there’s still this closed-minded mentality that an album isn’t official unless it shows up on your desk as a professionally manufactured CD or 12″ vinyl record. It’s just like the universal benchmark for whether or not it’s an actual album. People want the physical representation of the album to hold in their hands, so that pretty much discounts any of the digital methods of getting it out there. Then you basically are left with the people who want something to add to their collection – they don’t want to put this strange miniature masterpiece in amidst their CD Collection so it stands out and makes the shelf all unbalanced and weird looking… they want something that fits in their collection to accent it. Maybe I’m wrong. Fuck it, my next album will be a custom vinyl toy from KidRobot with a micro SD card slot to hold the music.

Tell me about your record label Neferiu.

Neferiu is my baby. The purpose of the label is as straightforward as it gets: expose dope underground music. I started the label back at the end of ’99, early 2000, with a compilation of primarily electronic musicians. The CD was called the Neferiu Sampler and basically it was designed as a stage-setter for the type of shit coming up on the label. It featured a lot of international artists, guys from Finland, Poland, Sweden, France, etc. and to be honest, most of the guys on there I’d never even met – it was just connections through online channels and the European demo scene connections that I made over the years prior to that.

Over the years we’ve released a tonne of great music, but I think only the past few years have we really been putting out shit that is starting to solidify a true label roster and family. Especially with the shit coming up in ’09, we’re really going to fortify the type of sound we’ve been plugging for the past few years. There should be new shit from Ricca Razor Sharp, Metawon & Dirty Sample, Pete Meadows, myself, The EquAzn, Stilz (of Shep & DJ Stilz), etc. Over the years I’ve kind of known what kind of music I wanted to be represented on the label, but there wasn’t enough of it to give that impression to the average onlooker. It’s hard to explain, but basically I’ve felt like the label’s sound is very wide in range, and because of that, we’ve had releases representing a LOT of different genres. I think to the average listener they might think that we’re just putting out anything and everything, but the truth is there has been this big picture all along of having this incredible catalog of multi-genre sickness and only now is that big picture finally starting to come together. The goal is that people who are totally down with Neferiu’s hip hop will be able to check out something else on the label and still find similar aesthetics and musical dopeness in the other shit we’re putting out. So I’m super excited about that shit coming together.

Does anybody truly wack try to get on board?

I have definitely got some wack demos. A lot of the demos I get are not really hip hop, they’re the more electronic flavored releases and you would be amazed to hear the similarities between [them]. I don’t mean to sound like I’m on a high horse or something, ‘cause I totally respect and appreciate any artist putting themselves out there and trying to push themselves, etc. But when you get a shitty CDR with sharpie on it, a shittier factory CD label with some shitty BIC pen writing on it all held together in a cracked CD case that looks like they did blades off it, it doesn’t really give the impression that you care about the impression you’re giving. Then you throw the disc in and it sounds like you’re just fucking with some fruity loop presets and not really even putting any artistry into it. Pass.

Have you found that you’re lumped into the “Nerdcore” sub-sub-genre category of music?

Probably not yet. I think it would probably be easier for me if I were. I don’t know if people immediately classify me as Nerdcore until they actually see me in person, rocking the glasses and the shitty Zellers hoodie or Value Village blazer. I think when people meet me, they are obviously taken aback to find that I make hip hop music, because the stereotypes that go with “who makes hip hop,” and the fact that I intersect with very little of those stereotypes. But fuck it, if being Nerdcore means I’m in a category along side Jesse Dangerously, then I’ll fucking put it on my shirt.

Is there a problem with that?

Haha not really, it may be the simplest explanation of what I do… it’s an easy way to describe my music without giving too much false pretenses. However, I think if someone came to my show expecting Nerdcore, they’d be pleasantly surprised with the addition of TechnoRobotnoFunkScatCore that they’d also see.

What is your earliest rap memory?

Earliest Beatbox memory was trying to imitate “Having a Roni” in like grade 5 or whatever, which I just thought was Vanilla Ice taking a piss till I heard Fat Boys and Biz. So yeah unfortunately Vanilla was the first one to introduce me to Beatboxing. Then when I heard that live track of Rahzel rocking “If Your Mother Only Knew,” that was like my first thought of learning to Beatbox properly and seriously, but that wasn’t till like 2000 or something.

First general rap memory…. we had a dope babysitter as a kid, so like the first few years of elementary school I was like 6 or 7 and this babysitter was big into rap. He’d always have much music on checking out the dopeness. He would read our Dr. Seuss books with us as if they were rap songs, like rap them out, and I had this old school Fisher Price turntable and he showed us how to scratch on it and it was fucking dope. At the time he was just a cool babysitter coming up with stuff for us to do.

Just a couple plugs. Check my radio show: Creamreefer for a sick showcase of smokey Saturday soundtracks. Every Saturday from 2-4pm (P.S.T.) on 101.7FM in Nanaimo, BC or online at creamreefer.com. Check my album Palmflowerblack at www.neferiu.com – I guarantee you won’t be disappointed. Check Neferiu.com for a steady stream of musical mind elevators. A huge shout to my Audible Intelligence & Neferiu boys – you guys are family ‘til infinite. Massive respect to UGSMAG, I doubt I’d have half the hip hop knowledge I do today without this magazine…