You have become the face of MilledPavement Records. I feel like mentioning them is the most appropriate way to start this interview. What’s the history of Milled Pavement and your relationship with the label. I actually first found you through Nomar Slevik, who was very prolific with early Milled Pavement releases.

I’ve always thought of Moshe (owner, CEO) as the face, so that’s wild to think about. My first dealings with the label/collective is when it was more of a crew, in 2002 or so. When Moshe was putting together a compilation called “The Lesson”, he asked Agent 8 and I to contribute a track, and I’ve been rolling with MP ever since. We’ve put out such incredible music from such a vast amount of people… Seditious Acts was the 88th release. To shed light, Jeep (DJ HALO / Four Finger Distro) holds a lot down for us as well. He’s an OG friend, and a great advisor to keep things on track. If you don’t have a team, you don’t have anything.

Nomar Slevik is a huge connector in mid-00’s indie hiphop. He knew everybody, and had their mailing address. Nomar had this job in 2004 where he had access to a CD burner and mail-meter, and we may or may not have sent  many CDRs to folks. It really helped light the grass-roots fire for both of us, and I thank Nomi for facilitating and being conduit for the underground for me. I was running around playing 20 crappy local shows a month, he was at home connecting the known universe.

I want to ask about your long time collaborator C$BURNS. How did you guys meet and when was the first time you worked together? You guys have become like the goth-rap version of Guru and Premier at this point.

I can’t actually pinpoint in time when I first met C$. I’d seen his band Seekonk years before we ever talked, and he would DJ at a Portland ME bar I worked at in 2006 or so. We connected through Moshe, and sharing mutual space. I loved the fact that he was an autodidact who dressed super goth/metal, but had the mind of a jazz musician. He and I started working on putting together his feature-heavy album Friends w/ Money on MilledPavement, then he helped me make sense of the mess of tracks I had for Blooddrive Vol. 3…and we’ve kept rolling like the Red Army for over a decade. He’s one of my favorite humans, ever, and easily the most talented comrade I know. On the rare occasion when he says “You might like this book/album/podcast”, I take that seriously. We’re kindred snobs for quality.

How would you describe your progression as a lyricist? This new EP is thematically consistent with your album with C$BURNS last year, “Subjugation of Bread”. Tell us about that.

This EP is in lockstep with The Subjugation of Bread, absolutely. This is an expansion-pack, or “extended universe” to better flesh out our Anarcho-Communist worldview in an art-rap landscape. We’ve had some appreciable success with our co-billed collaboration, and we have a stack of songs in progress.

In terms of lyrical progression, it’s difficult to gauge from the inside. I just write for a project, in the year(s) that I write for it. Every year, I change as a person, and my ideas change. I will say that the writing feels effortless. I’m not “trying”, I’m “executing a vision”, and I feel great about that development. I made a commitment in 2011 that I would never write a song about “feelings” again, only “ideas”. I’ve since softened that stance, but the idea of eschewing “My” “Personal” “Feelings” has aided the co-billed work I do with C$.

I’ve noticed more First Person lines on this one, is this one more personal?

This is a question that extends beyond what I didn’t want to say in the last answer, but I appreciate you noticing.

I’ve re-inserted the First-Person, which I’ve left alone for a long while. I felt I needed more of myself in the lyrics, to be present, and not a detached narrator. The Accelerationist is as much of a diary-entry as a polemic, as is The Beauty of Pure Concrete. I was “not OK” for a few moments, and could not divorce myself from the art. I like how those songs turned out, and I got some personal misgivings out there, even if hermetically coded.

There are no covid bars on your last two releases. I’ve talked to you throughout Covid and I know it’s something that has altered all of our lives and that you’ve taken very seriously. No mention of Covid on your dystopian era releases though. Is there any particular reason?

I want to make art that exists outside of time. I know we are all products of our time, or generation, epoch, whatever…I seldom use pop-culture references for the same reason. I don’t need a time-stamp. I’ve made reference to plagues in my songs since 2009. I had to resist the urge to release “I Told You So: The Mixtape” (laughs)!

Referencing current events/politics/etc is cheap. It dates your art, and pegs it to a place in space-time immediately.

You’ve been rapping for twenty-plus years now. How has the landscape of underground hip hop changed in your eyes?

This question alone could be a webinar. The landscape has changed immeasurably. In 2005 I was paying my poor-kid bills from selling CDRs and taking Greyhound buses to play shows. I also lived in abject poverty, but it felt like heaven to sleep until noon every day and wake up to ship CDs and rehearse my unrecorded verses. There were peers blowing up making weird/progressive hiphop, and I, like so many others, thought I was next.

In many ways I was next, but the sales-floor dropped so hard around 2006 when my debut album came out that it adjusted my expectations. I toured my ass off, and kept my supporters while gaining new ones with every show and release. That model remains the same. I come from DIY Punk roots. The More you Do, the More you Are.

Is “the scene”  still a youth culture? The first time we rapped together, I believe both of us were about 21 years old. That was 17 years ago.  Are the kids still interested in our form of rap music?

I’m not entirely sure, because I don’t pay attention. I look at myself, MilledPavement, and our friends. I do better mail-order, streaming, and ticket-sales every year. I don’t make “weird” post-rap music to get rich or famous. I do it because I love it, and because I want to. I’m very fortunate to have enough supporters to make it a viable vocation. I’m a blue-collar artist, because, to quote James P Honey, I’m “Hugely Overrated by a Tiny Few”.

Every time I play a mixed-genre show or a rap show with younger artists, I make fans/supporters, and that’s invigorating. Our “scene” as we knew it, does not really exist anymore. Maybe that’s ok.

As a follow up, where do you see this micro-scenes place in the history of hip hop? Can we preserve such niche and underground music for future generations or will it eventually just disappear?

It is already disappearing, in some ways. It’s not a negative per se, it’s cool to be here for 3+ generations of this stripe of hiphop. There are some flagship-artists that are now “big”, but that does not necessarily shine light on their peers/crew in the way it used to. “Back in the day”, if you were into X artist, you did the research and listened to everyone in their crew/label to see if they were cool to you as well. That isn’t happening as much, and so labels, crews, and collectives do not render as much importance in listeners’ minds. I’ve had fans say to my face “I like YOU but I don’t like HIPHOP”, which is actually an insult as opposed to a compliment. I can’t really trip about it though. I’m just exceedingly thankful to have a career in the music I love for this long. When I hear that Johnny Cash song “I’ve Been Everywhere”, I literally can tick the boxes. Do more songs with your friends to close-the-algorithm.

Tell me about the importance of physical media when it comes to your art. You’ve done a string of cassette releases over the last few years. Do you think CDS are nearing obsoletion?

Physical media is of utmost importance in terms of sustainability. I’m also a vinyl/tape/CD/book collector, so I’m biased. I like objects. My shows and tours are essentially a commercial to sell shirts and physical media. I’m at peace with that, because that’s reality. I love being a loquacious traveling shirt salesperson.

What are you plotting now, what’s next, if you can say? (etc)

I have 2 collections of songs right now. 1 pile for a BRZO solo album, and 1 stack for another BRZOWSKI & C$BURNS release. No timeline on either, as this year will be about sponging information, writing, and shows with friends. I’ll be back in Europe in 2023 for certain, and a few regional runs are in the works as well. I won’t say more than that, as I create glacially slow…so I don’t make timeline promises. I’m exploring environmentalism, and the radical movements surrounding it, for inspiration.

Thanks so much for taking the time to dive deep with me, I love y’all- meaning Based Greenfield and UGS! 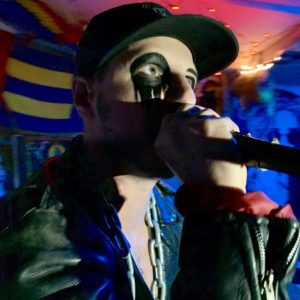