Producer and MPC-enthusiast Erick “Progeny” Frias has been flooding the indie hip hop landscape with artfully crafted productions for the last decade. Raised in San Antonio, Progeny uprooted his operation and relocated to Seattle in 2017, and served as the production backbone of such indie-rap touchstones as Chisme, Ghost Palace, hERON, Big Kids Run, and a host more. He’s happy to let you know from the jump that he represents an impressive amount of crews Por Vida, naming Fake Four Inc., Concuss, FFU, Boombap Masterpiece, and ATP among their number. What is not readily apparent in his artistic output, is that Progeny carries himself with a quiet confidence, an easy smile, and a laugh that helps lighten any room. He possesses a magnetic personality that naturally lends itself to a crowded room, facilitating a good time, even if the music to which he lends his talents is straight-faced and serious. The party has not officially started until his shirt is off, and misplaced somewhere near the stage. You didn’t hear that from me.

After being a big part of the hip hop scene in SATX, you moved out to Seattle. What’s the transplant experience been like, going from TX to the Pacific Northwest?

Well… when I moved up here I had a plan to release some projects, and that kept me busy along with touring at the time, so I really didn’t get to delve into so many things in the city for shows and all. One thing that did shock me is that if you’re trying to book a venue, you have to pay to set something up. I think that’s pretty fucked up though – I never did that in San Antonio. I would book shows, make sure people came out, the touring acts got paid, and drink sales were up so everyone could be happy. That is not the case here. Basically starting all over was (and still is) a drag.

How did you develop the style of being fairly split between “sample-driven” and “live instrumentation”? Was that inclination always there? That isn’t necessarily a commonplace combination in hip hop production at present, where the VST is dominant.

Yes it was. Being a big Nirvana fan I always wanted to play guitar. Guitar was my first instrument actually. I remember listening to Cypress Hill’s Temples of Boom, and the samples that were used in that made me go back to my parents’ records, and from there I knew I wanted to sample everything. Listening to MF Doom got me really big into sampling as well. Then when I listened to the producers on Anticon (a seminal late-90’s/2000’s hip hop label/collective, known for unconventional production, content, and experimentation – BRZO), I knew that’s what I wanted to do. Later on I incorporated both the mpc and live instruments which have helped me more in getting my own sound and layering over the samples.

Let’s indulge in some nerd-ism. Tell us what your production/gear setup consists of right now.

I will start out with my main piece of gear I use the most, the MPC Live. That’s what I mainly use now for all my production. I use the MPC 1000 for live shows. I have an Alesis Micron synthesizer that mainly just stays in the studio but I have taken it for live shows as well. I have a E-mu PK6 Keyboard/Synthesizer and an Arturia Micro Brute. I’ve been really trying to make my own patches on that gear. I have a Korg MS2000 that I’ve been incorporating a lot in my beats. I have a Roland Sp-404 for live shows. The Zoom SampleTrak ST224. I have a Squier Strat and a Squier Jaguar for electric guitars. I also have a German Texan Frammus acoustic-electric guitar. And the last thing where I record all that into, is Pro Tools 8.

That’s a lot of hands-on gear, and that feel really comes across prominently in the production. The beats have a “played” musical feel as opposed to “samples cut-and-pasted” to a grid.

Outside of hip hop, can you tell us an artist/genre or two that in the last few years got you amped as a fan, or inspired to create?

Chicano Batman. Their style is very soulful and psychedelic. When I listen to them it reminds me of what my parents listened to when I was a kid, like Los Angels Negros, Los Pasteles Verdes, Los Terricolas, Los Galos etc… The sound that they create is just that nice late-60s early-70s psyche-sound that you don’t hear a lot anymore, and they do it well. When I listen to them I just get all amped to create something in that form of sound. Or at least try to, in my own style.

I feel like this is an unfair question, but out of all the releases you’ve done, is there a favorite or two, and why? Everyone is programmed to say “The New One is the Best One!”, but I know you better than to get fed that line.

Damn putting me on the spot! Hmmm. I would have to go with Big Kids Run as a big accomplishment. I worked with Barfly on this project and when we worked on it there where very minimal samples on that record. It was just me on the guitar and bass, and my drum machine. That was like my “Grunge Hip Hop” album and I am very proud of how everything came out on it. But on the reals though. Every project I’ve worked on is my favorite. They have different sounds and feelings on how I made that beat and what I was going through or thinking right at that precise moment, I like them all. And I just wouldn’t be able to pick a “Favorite” I’ll leave that up to the listeners.

Well handled. As a producer that also tours doing more than “pressing play” on your tracks, do you prefer the studio or the stage? Or are they both part of the same thing for you?

I like to do both. I enjoy being up on stage and sharing the music that I’ve created, and it really comes down to pushing-buttons and finger-drumming. When I’m in the studio I’m creating those sounds before they hit the stage and practice it. So they both go hand-in-hand, I would have to say.

Tell us about your latest release, Wet Dreams, and what else we should have on the radar for 2020?

I have a new instrumental project that just dropped called Wet Dreams, that started off as a joke. This is how the story goes: my good friend Jason threw a party in the park where we all got to DJ. DJs from the PNW, and the DJ that headlined the party was from Austria, named Spinelly. Well, I ended up getting pretty toasted at the end of the night, and Jason (AKA J.Ohm) took a picture of me with my shirt off. So I put it out on the internet saying “Wet Dreams coming at ya real soon”, jokingly. But people hit me up and had asked me when it’s coming out. So I said “Valentine’s Day”. And here it is now. I am also focusing on a feature-based project that will be released later this year. I will release another project I did with SB The Moor. We finished this 5 track EP about 2 years ago. I really don’t know why we are waiting to put this out there yet. Oh yeah. Rory (AKA milo, AKA R.A.P. Ferreira) and Ceschi might team up to put this on tape for us. Lastly, a new Ghost Palace album and hERON album which are already finished. Planning to be out later this year as well. I’m excited for 2020.

Thanks so much for your time player.  Let’s take it back- give us some final thoughts/shoutouts. 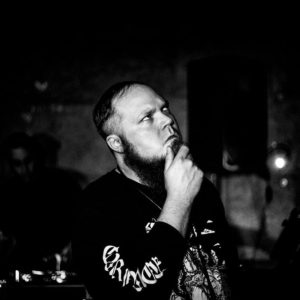 Progeny – “Mushroom Trip Into Its Depth”

An Illustrated Mess – One More For Safety