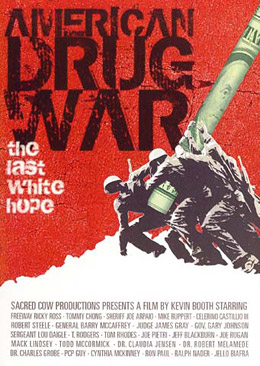 I’m watching a movie by a new filmmaker and author Kevin Booth called American Drug War, which as you may have guessed, presents the inadequacies and hypocrisy of Richard Nixon’s famed war on drugs and formation of the DEA in the 1970s. Booth’s film touches on his family’s personal drug history and highlights America’s inane and fruitless drug battles.

The main problem with the film is that the focus is not clear and the topic is played out. Booth discusses his brother’s use of recreational drugs and possible schizophrenia throughout the film; provides evidence that the CIA was trafficking Cocaine into the United States (and was instrumental in rampant Crack-Cocaine abuse in low-income American neighborhoods) as well as Tommy Chong’s superficial arrest for the bong business his son owned and operated. There are other high-profile interviews, but the film bounces around between these topics and Booth’s interviews rely more on the cache of his subject’s celebrity, rather than a solid backing to the broad message of the film. American Drug War does not fail per se, but it “preaches to the choir,” and does little to bolster the principle of Liberty, which is the heart of the pro-drug/decriminalization issue. Essentially, the film does not make a convincing argument to a would-be prohibitionist.

The highlight of the DVD is the special features section where Booth includes the extended, sparingly edited interviews of his prominent individuals. Booth shows the opprobrious and completely ignorant Joe Arpaio (he’s the guy who runs the frugal “Tent-City” jail in the Arizona dessert). He interviews Tommy Chong, his wife and two sons who recount the night that the DEA literally swarmed his house and the lunacy of the whole ordeal.

While the film is not the best one of its kind out there, but it’s definitely worth copping if you’re interested clandestine government operations.

Better Than: Gambling Gods and LSD
Worse Than: Grass