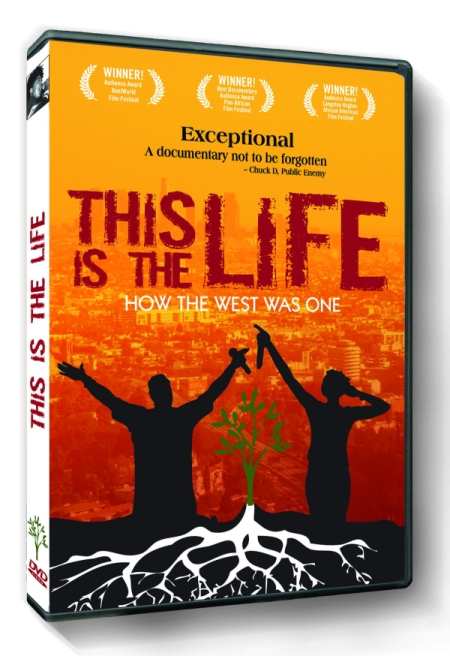 One year ago, ugsmag interviewed Ava DuVernay (a.k.a. Eve from Figures of Speech) about This is the Life, her documentary film of a health food shop on Crenshaw and Exposition and its role in spawning some of the most important hip hop artists from the Los Angeles underground. The owners of the Good Life had already supported community entertainment events when Bea Hall – a local activist – proposed a hip hop night where kids could come in and express themselves verbally. Insulated from the gang related and racially motivated violence of L.A. Every Thursday night, kids would step into the spot and rap, but not without a few provisions: swearing was not permitted and the audience was compelled to opine over a vocalist’s awful set, by chanting “please pass the mic!”

DuVernay’s film is a scrapbook of sorts, largely relying on the grimy VHS footage to support the original Good Life regulars’ memories and impressions of the nights. Although the archival video footage is largely discoloured, fuzzy and filled with uneven camera movements, it fits the film in that way that watching old NFL game films from the ‘70s does – it captures that time-period perfectly. Some of the best moments of the film are of watching Cut Chemist or 2Mex in the present discussing the Good Life and then seeing them captured in video, younger, naïve versions of their present selves. Chali 2na appears in the film extensively – as a surprisingly cerebral emcee at the Good Life and as an interviewee. Omid is also featured as the music consultant and an interviewee for the film, but he also sports a handsome mustache in the old video footage.

The most impressive thing about this film lies in the fact that a huge number of the high profile, west coast rappers, producers and Djs who made appearances at the night. Abstract Rude, Busdriver, Cut Chemist, Myka Nyne, P.E.A.C.E. and Pigeon John (to name a few) were all regulars of the night.

This is the Life is currently on Showtime, but the bonus features on the DVD are worth watching as well. Highlights include: additional footage of the Good Life rap night, Myka Nyne discussing details of his childhood, an interview with Nouka Basetype of the Nonce discussing the mysterious circumstance behind Yusef Afloat’s death. The whole package is quite impressive, definitely a must-see for all hip hop heads and is without a doubt, one of the best rap documentaries I have seen to date. This is the Life is distributed by Forward Movement in Los Angeles.

Ava DuVernay The Good Life This is the Life