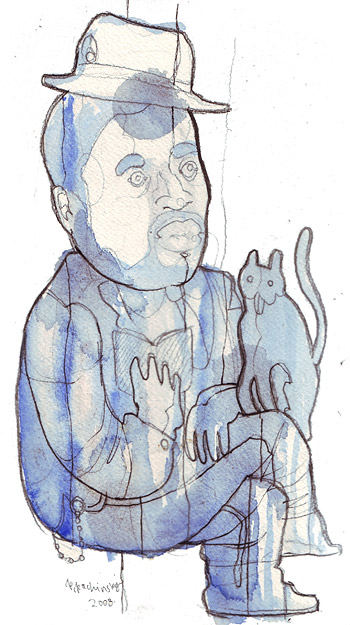 Illustration by Pearl Rachinsky
At one point in hip hop’s short history, Queens native Mr. Complex (a.k.a. Corey Roberts) was an underground rap kingpin, releasing a string of independent 12”s that sold exceedingly well. Although he was affiliated with Organized Konfusion, his big break was in 1995 with the release of the Visualize 12” (Why Don’t Cha on the flip), which got him on Egotrip, number 4 on charts that were teeming majors; all while not having a full-length release. A compilation of his 12” run was released on Rawkus in 2000 called Complex Catalogue. Since then, he has released Twisted Mista (2004) with heavyweights Biz Markie and Dilated Peoples on the ticket. So why should you care? Because Mr. Complex represents the music culture before the ubiquity of internet promotions. Since the growth of the new market, Complex has grown and evolved away from the industry, moving into the film and television realm as a writer/director.

Today, it’s impossible not to notice that times have changed, “the whole internet [and] youtube game” is a “new approach” compared to the mid-90s where notoriety was gained through the release of 12”s and magazine reviews and interviews. Anticipation has disappeared, droves of people no longer flock to record stores checking for new material or to cop a new album. Gone are the days where heads would “go to Fatbeats [in NYC] and wonder ‘ooooh, what’s that?’” Days where 20-30 copies of a 12” sold in an afternoon are scarce at best. The prevalence of cheap recording equipment and “dime-a-dozen” rappers and producers mean that songs can be recorded, mixed and uploaded from one location or even one machine; “it’s not as special anymore, there are no stages.”

In our current age of apathy, show attendance has suffered as well. People are less likely to wild-out at any rap show; let alone the latest esoteric hip hop act. People are happier sitting at their base, checking the myspace and spreading their own special brand of mediocrity through their home studios. Complex surmises that the new millennium changed people’s spending habits, especially with the emergence of music downloading maturing into the state that it’s in today. Then the events of September 11 in New York City further shifted the focus away from a carefree, party vibe. Complex recalls “it took months before people would go to [a] Manhattan club,” and in retrospect claims that “certain times it’s time for a Public Enemy or Dead Prez song.”

With the exception of hip hop culture’s incessant lamentation of anything new (let’s remember that it developed from youth expression), it’s no surprise that as rappers get older, they get cranky. I’m not saying that Complex falls into the grumpy rapper category, but he does tell me that getting older makes one “try to find other ways to make money,” and that the thrill of doing a show has subsided, especially with “bills and [raising] a family.” Combined with the fact that record sales don’t account for the same return as they used to, Complex found himself aligning with Queen Latifa’s camp in the film world. Although he admits that “music is sort of on the backburner,” Complex assures me that has some projects that are finished and awaiting release, one called Swiss Chocolate Cake and another “lost album” that Complex says he wants to “throw out for the people.”

Directing Pharoahe Monch’s video “When the Gun Draws” and serving as an assistant director and writer on other projects. He is currently working on a series of low budget, shorter films with the hope of securing funding for bigger future projects. Although it seems that Complex may have turned his back on hip hop, it’s important to remember that we’re in changing times and to be ahead of curve, more and more artists will have to diversify their creativity.